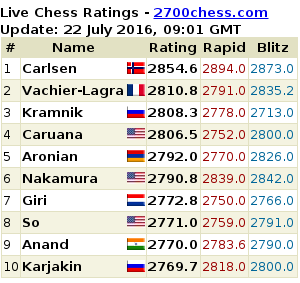 Meanwhile, Sergey Karjakin failed to even his score against the World Champion Magnus Carlsen in their last two games leading to the World Championship in November, after they drew their Round 8 game. Carlsen won against Karjakin in Round 3 of this event.[replay]

Hikaru Nakamura stays unbeaten in this tournament as he drew his 8th round game against Wei Yi.[replay]

At the end of Round 8, Wesley So is tied at 3rd place with Wei Yi.

Bilbao Masters Final 2016 Ranking after Round 8

Crosstable and standings after 8 rounds of play.