GM Veselin Topalov appears to have made losing a habit in the first 6 rounds of London Chess Classic 2016. This is his fifth loss in 6 games. He is now out of the top 20 in the live ratings list.

His latest tragedy in the 6th round came from the tournament leader, Wesley So. Fabiano Caruana and Maxime Vachier-Lagrave won their games as well against Hikaru Nakamura and Levon Aronian, respectively.

Replay the games of Round 6 below: [replay]

This win by Wesley So in the 6th round inches him closer to the Grand Chess Tour title, and thus the additional $100,000 purse. He’s also inching closer to Vladimir Kramnik for the 3rd spot in the live ratings. They are now only separated by some 4 ELO points: 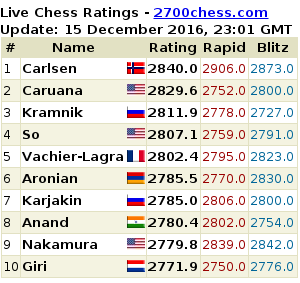 So still leads the London race with 4.5 points, followed closely by Caruana with 4 points. They both have yet to face each other in Round 8.

Wesley So is set to face Vladimir Kramnik, Fabiano Caruana, and Maxime Vachier-Lagrave in the 7th to 9th rounds.

London Chess Classic 2016 Ranking after Round 6

Meanwhile, Anish Giri is still the master of draws in this tournament, with 6 draws in 6 games.

Replay all the games played so far in London Chess Classic 2016.