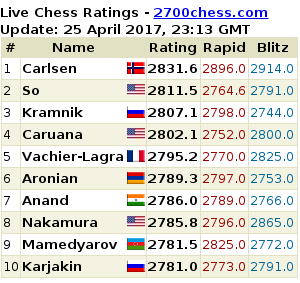 At the end of Round 5, Mamedyarov still leads, followed closely behind by Adams and Eljanov. So shares the 4th spot with Karjakin, Topalov and Kramnik with his 1 win, 1 loss, and 3 draws record.

Shamkir Chess 2017 Ranking After Round 5