Norway, the country and team represented by the World Champion, Magnus Carlsen, finished strong at fifth place in the last Olympiad.

But the tweets from Carlsen right after the conclusion of the event drew interests and intrigues among chess fans: 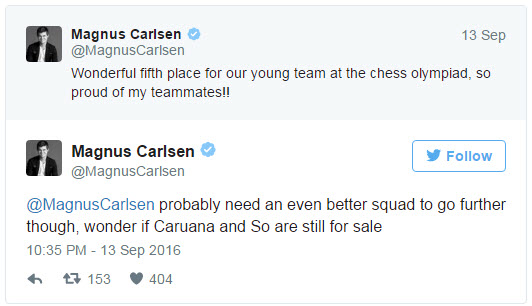 Chess players switching federations is not something new in the chess world. They have happened a lot of times in the past (See: List of nationality transfers in chess), especially among the former USSR countries. But they have not become too controversial until today when the team involved, the United States that benefited in the players’ transfers, won the Olympiad.

Nevertheless, I wonder which is more insulting from the insinuations of Magnus Carlsen: the paid up team or the paid up players?