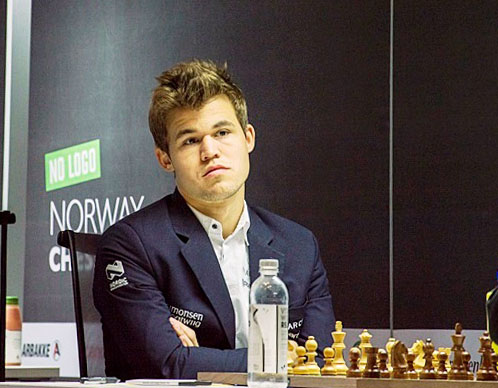 After seven rounds Magnus Carlsen looked almost certain to win the Altibox Norway Chess tournament. But then he lost against Levon Aronian in round eight, endangering his tournament win. But things went his way in round nine. Aronian drew against Pentala Harikrishna while Carlsen defeated Pavel Eljanov to win Norway Chess for the first time.

A true champion knows how to pick himself up after a fall–even from the penultimate round.

Levon Aronian beats Magnus Carlsen in the eighth round of Altibox Norway Chess 2016 to catch up with the latter and actually take the lead after tie break.

Standings after Round 8 follows:

Standings after Round 8 Altibox Norway Chess 2016

In round seven Magnus Carlsen played against Vladimir Kramnik, one of his predecessors as World Champion. Carlsen seemed well prepared and won a fine strategic game in which he exploited Black’s weak square f5 in textbook fashion. Levon Aronian used his space advantage to harass Black’s king and to win with a mating attack. The three other games were drawn.

With the way Carlsen is playing outstanding chess in recent months, I wonder if he gets to break the 2900 ELO rating barrier anytime soon?

Check out Carlsen’s win against Kramnik in Round 7 of Altibox Norway Chess 2016.

Magnus Carlsen draws with Anish Giri in the 5th round but still retain the lead thereafter. Crosstable after 5 rounds follow:

You may replay the game: Magnus Carlsen vs. Anish Giri, Round 5 – Norway Chess 2016.