More info can be found here.

You may catch the updates of the games here.

So, how come the tournament has been going on for a while but there was little interest on it around the internet? Probably because they didn’t tap ChessHive to feature the event? 😀

The tournament has just concluded, with GM Rogelio Antonio Jr. tied with GM Jayson Gonzales when they gathered 9 (out of 13) points each. But after the tiebreak is applied, Antonio appears to be the winner.

They are closely followed by the young and promising IM Paulo Bersamina, and GM John Paul Gomez with 8.5 points.

Here’s the final ranking crosstable of the Open Division after 13 rounds: 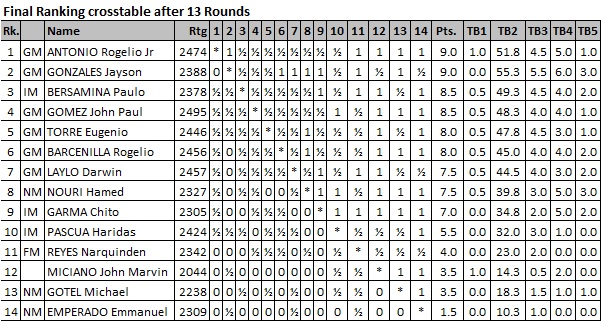 Now, the more interesting question: Is the 18-year-old Paulo Bersamina the next mainstay of Philippine chess?

Replay all the games here.